Get a Free Quote

Gishwati-Mukura National Park is Rwanda’s recent addition to its list of national parks. With the creation of this park on 1st/02/ 2016, the number of game parks in Rwanda increased to four. Other national parks include Nyungwe Forest national park, Volcanoes national park and Akagera national park. Gishwati is located in the North-western side of Rwanda and covering the districts of Ngororero and Rutsiro.

The park was formed by combining Mukura Forest Reserve (1,988 hectares) and the Gishwati Forest Reserve (1,440 hectares) in 2015, it ended up being called Gishwati-Mukura National Park. When it was first created, it covered over 250,000 hectares but was depleted to nearly 28,000 hectares in largely due to uncontrolled resettlement, illegal farming of land, mining and lumbering in the forest after the 1994 genocide among others.

Great news however is that numerous efforts were applied by the Rwanda Environment Management Authority and other conservation bodies to revitalize the Forest Reserves. Formed in 2015, the park’s role is not only to conserve biodiversity, but also improving ecosystem services and provide an alternative income generating opportunity to uplift the nearby communities that are directly involved in its protection.

Gishwati-Mukura national park is one of the richest game parks in Rwanda in when it comes to biological diversity. It is a home to a considerable number of mammal species and great deal of primate species such as Eastern Chimpanzees, the Black and White Colobus monkeys, L’hoest monkeys, Golden Monkeys and Blue Monkeys. Other mammal species are the serval, Black-fronted duikers, Red river Hogs and southern tree hyrax among others.

The park also has over 60 species of trees that include bamboo, Giant tree ferns, Carapa Grandiflora, and local hard wood. There are also over 130 bird species in the Park which include Woodhoopoes Old world warblers, Mountain-yellow warblers plus 14 Albertine Rift endemics such as the Rwenzori turaco and red-throated alethe and so much more.

A trip to Gishwati-Mukura national park is an assured off – the – beaten experience. Here travelers can experience not only chimpanzees but other primates living in the pristine montane forests. With over 29 chimpanzees in the park, it is undoubtedly among the main chimpanzee tracking places in Rwanda. Get a face to face encounter with these primates in Gishwati-Mukura forest for a lifetime experience.

Over 130 species of birds including 14 Albertine Rift endemic bird species and some IUCN Vulnerable bird species have been sighted in this park. Among the notable species that will blow your mind include the, Ruwenzori Turaco, , Mountain-yellow warblers Red-throated Alethe, Old World Warblers, White-headed Woodhoopoe, Stripe-breasted Tit, Ruwenzori Batis, Purple-breasted Sunbird the Grey Crowned Crane, Regal Sunbird, Strange Weaver and among other interesting species.

Hike through the Congo Nile Trail

The Park is located besides the Congo Nile Trail (in Western Rwanda). Visitors can engage in this thrilling adventure to explore a number of close villages that will provide them with a deeper understanding of the true Rwandan rural life.

With all the interesting attractions inside the Park, visitors usually engage in guided nature walks to discover unique primate species, different bird and butterfly species. Tourists can always choose butterfly watching as an independent activity to have a heavenly experience with these beautiful creatures.

Accommodation in the park

Currently the park has a limited number of accommodation facilities to offer to her visitors. However, one can use lodges in the nearby Nyungwe forest or Lake Kivu. The most recommended one however is the Gishwati lodge and also a few campsites for budget travelers.

Gishwati-Mukura national park is found in the North-western side of Rwanda and shared by Ngororero, Rubavu, Nyabihu and Rutsiro. The park is easily accessed by road or by air, whether from Kigali city or other parks in the country.

In conclusion, with the formation of Gishwati-Mukura National park the number of National Parks in Rwanda has increased enabling tourists to have a wide range of activities to experience in Rwanda. Travelers can also visit the park after an exclusive gorilla safari in Uganda’s Bwindi Impenetrable National park or Mgahinga national park. Visitors can travel from Uganda by road, sleep over in Kigali or Musanze and proceed to the park the following day.

Book your dream safari below.

Do you want to customize this safari by adding more activities, days or destinations? There is a much more detailed contact form with all these details. Kindly click the book now button below.

We present to you essential planning article guides below to help you make the best travel plans.

We are beautiful one day and perfect the next! Book with us and book it out of here!

We are a travel-love-driven travel agency that will make you fall in love with Africa even more than us.

Booking safaris with us

We offer extremely adjustable safari booking terms that'll make it easy for you to reserve or defer your trips.

Our promise to you

We promise you the best of your African safari holiday. We shall keep it the best way always.

We are always commited to delivering the best travel service. Your safari experience & travel comfort is our priority.

A percentage of the profits we make from trips goes to supporting single mothers in local communities.

To deliver the best travel experience, we do things the right way; right from the initial planning stage.

When you reach out to us, we will carefully listen to your needs and make appropriate proposals.

Then we will discuss out options and make unlimited revisions to your package until you feel content.

We will tentatively make your reservation and we discuss through our options or make proposed changes.

Spark off your safari plans by speaking to one of our gorilla trekking experts...

Call one of our safari experts, arrange for a video meeting or send us an email for awesome advice and ideas. 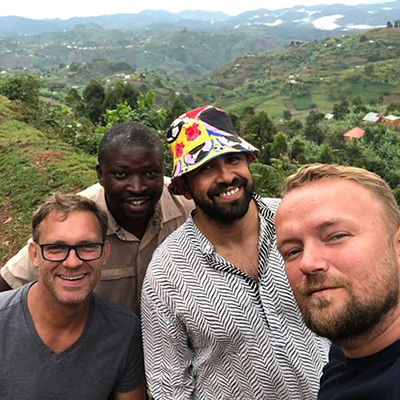